The board consists of seven individuals who represent the companies, agencies and institutions owning shares in the company.

Chairman of the Board (non-executive)
Mr. Santiago Bolíbar Piñeiro. 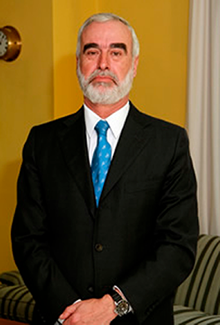 Chairman of
the Board

Chairman of the Board

Chairman of the Board (non-executive)
Admiral of the Fleet

He was promoted to Sub-lieutenant in 1975.

He was promoted to Admiral and assumed his duties on April 8, 2011,being responsiblefor the preparation and generation of the Force, as well as the planning, direction and control of the execution of the permanent missions assigned to the Spanish Navy in peacetime.

Admiral Bolíbar has been awarded sixteen Spanish and foreign decorations.