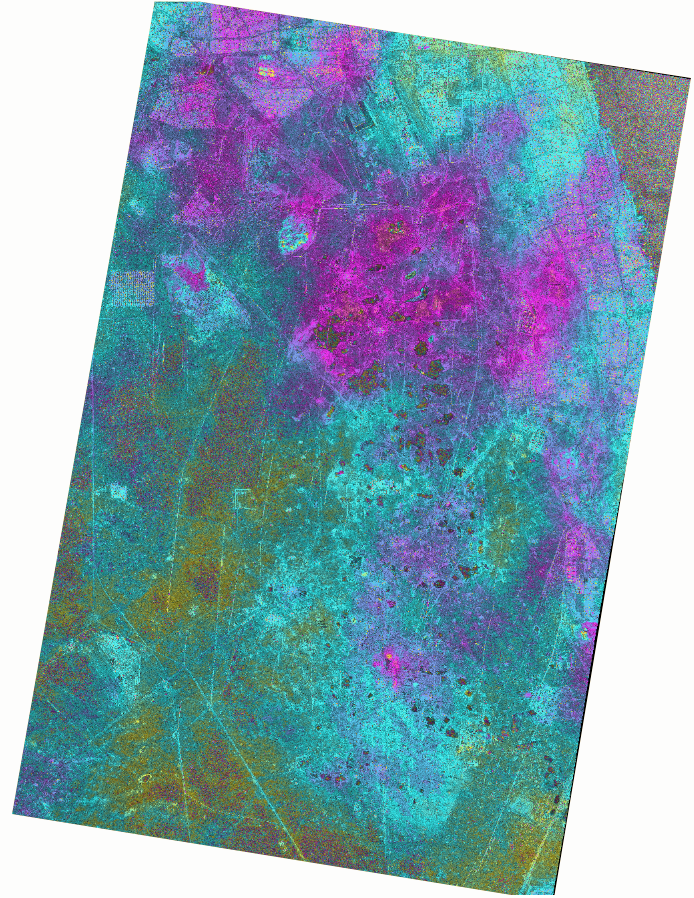 Friedrichshafen, Madrid, 12 February 2019 – Hisdesat and Airbus Defence and Space have generated the first joint TerraSAR-X / PAZ Radar Interferogram. This milestone demonstrates the missions’ capacity for cross-sensor interferometry, whose processing is among the most challenging.

Interferograms are typically used to derive the topographic elevation and deformation of the Earth’s surface, and are created using at least two different images acquired at different date. This flattened Cross-Sensor-Interferogram has been created from a mixed image pair with 4 days temporal separation acquired by TerraSAR-X and PAZ (StripMap scenes from 22 and 26 November 2018). The area covers the oil and gas production site Burgan (Kuwait) and parts of the Persian Gulf. The oil field is the world largest sandstone oil field with the total surface area of about 1,000 km².

As PAZ (owned by Hisdesat) is positioned in the same orbit as TerraSAR-X and TanDEM-X and features exactly identical ground swaths and acquisition modes, they all three form a high-resolution SAR satellite constellation, jointly exploited by Hisdesat and Airbus. With the launch of PAZ, the observation repeat cycle has been divided by half, which improves the monitoring of fast ground deformation phenomena that can endanger lives and infrastructures.

“In Hisdesat we are very proud of reaching this milestone. Interferometry is one of the most technically demanding applications and thanks to this successful joint exercise with Airbus we have not only demonstrated the top performance of our PAZ satellite but its full compatibility with TerraSAR-X and TanDEM-X. Now operation in constellation can become a reality and we will be able to provide to our customers full set of images and services with the constellation.” said Miguel García Primo, Chief Operating Officer at Hisdesat.

“This is a major step towards achieving the implementation of our TerraSAR-X / PAZ Radar Constellation. The level of accuracy obtained with this interferogram is a guarantee for our customers to continue to rely on the high quality standard we have set with TerraSAR-X and TanDEM-X over the past decade, but with an improved monitoring capacitiy” said Hanjo Kahabka, Head of Production and Radar Constellation Manager at Airbus Defence and Space, Intelligence.

About Airbus
Airbus is a global leader in aeronautics, space and related services. In 2017 it generated revenues of € 59 billion restated for IFRS 15 and employed a workforce of around 129,000. Airbus offers the most comprehensive range of passenger airliners from 100 to more than 600 seats. Airbus is also a European leader providing tanker, combat, transport and mission aircraft, as well as one of the world’s leading space companies. In helicopters, Airbus provides the most efficient civil and military rotorcraft solutions worldwide.

About Hisdesat
Hisdesat was born in 2001 as an operator of satellite government services to act fundamentally in the areas of defense, security, intelligence and external services. Since 2005, the company provides secure satellite communications services to government agencies in different countries and since September 2018, it provides Earth observation services with radar technology through the PAZ satellite, successfully launched on February 22nd. At present, the company is developing new constellations of maritime Satellite Traffic Information Satellites (AIS). More information: www.hisdesat.es.