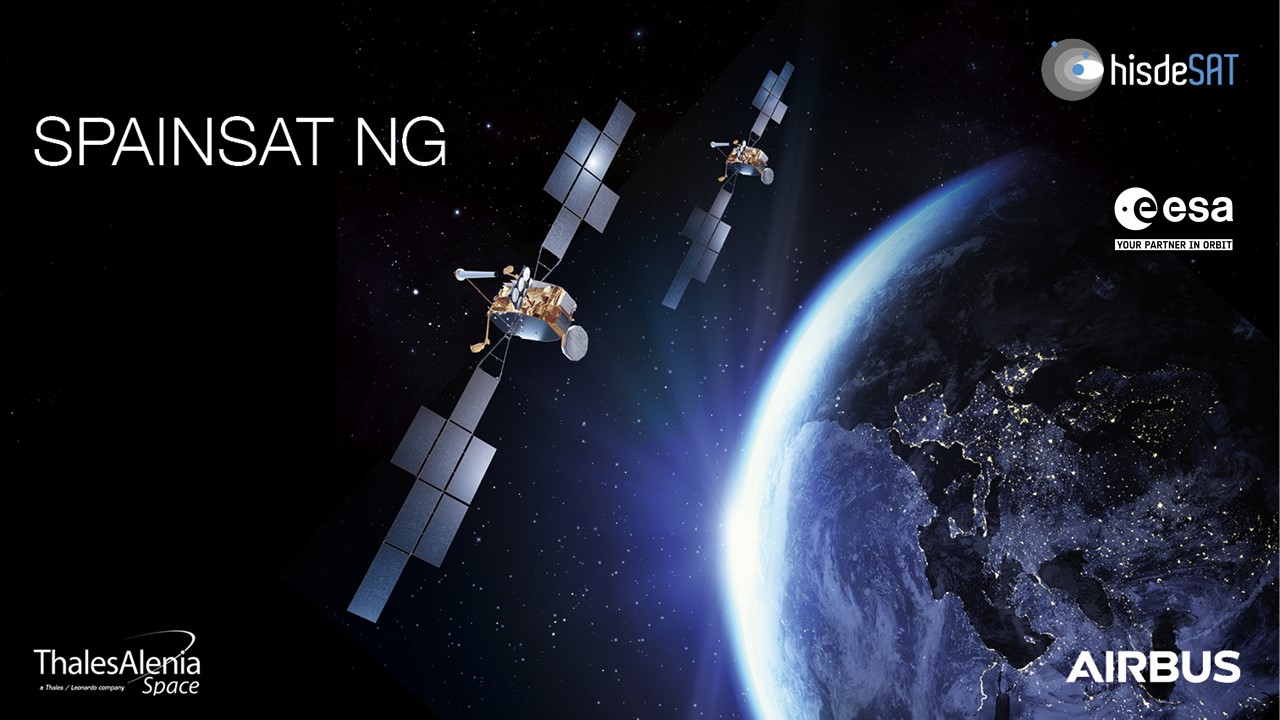 – Spanish space industry to integrate communications payload of both satellites in Madrid.

Madrid (Spain), 20 December 2021 – The SPAINSAT NG programme has successfully passed another important milestone, the critical design review (CDR) of the payload and the complete satellite, including the CDR elements of the Pacis-3 partnership project with the European Space Agency (ESA). The review was declared successful after verifying the good progress of the tests performed on the development models of the X-band payload.

This important milestone confirms the robustness of the design and technical capabilities of the SPAINSAT NG satellite system. At the same time, it signals the start of the satellite integration activities. In parallel, the manufacturing of all the flight elements of the satellites has started, both of the all-electric Eurostar NEO satellite platform and of the payload.

Furthermore, the structure of the Communications Module of the first satellite, SPAINSAT NG I, is already at Thales Alenia Space’s site in Tres Cantos, Madrid, to begin payload assembly, integration and testing activities.

“The technical teams of our co-contractors, Airbus Defence and Space and Thales Alenia Space in Spain and France, together with the rest of the subcontractors are doing an outstanding job, as are those of Hisdesat, acting as customer”, comments Miguel Ángel García Primo, Hisdesat’s CEO. “Likewise, ESA and CDTI are participating in an important way in the Pacis-3 programme, a Public Private Partnership between ESA and Hisdesat to develop the most innovative elements of the satellite, especially the X-band payload, with the most advanced active antennas in Europe, and the pallet, antennas and mechanisms in Ka-band.”

“This milestone confirms the viability of the satellite flight elements, with new technologies developed, here in Madrid by Airbus,” said Fernando Varela, Head of Airbus Space in Spain. “Our teams are ready to start the integration of the satellite payload, especially that of the new active antenna fully reconfigurable in orbit with geolocation capabilities.”

“The success of the CDR and the arrival of the Communications Module structure of the first satellite at Tres Cantos marks the beginning of a new momentous phase of the project,” said Stéphane Terranova, CEO of Thales Alenia Space in Spain. “For the first time we are going to carry out in Spain the integration of the communications payload of both satellites, which means making a qualitative leap for the national industry.”

Elodie Viau, Director of Telecommunications and Integrated Applications at ESA, said: “The Pacis-3 Partnership Project with Hisdesat has proven to be a catalyst for key technologies. Pacis-3 shows how the European space industry can respond to an emerging global market for secure satellite communications.”

ESA’s Pacis-3 partnership project supports the development and integration of innovative satellite payload elements, such as reconfigurable transmit and receive X-band active antennas, and the deployable pallet with individually steerable Ka-band antennas. The partnership project takes the risk out of the partners’ investments to respond to market needs.

The SPAINSAT NG programme comprises two satellites, SPAINSAT NG I and II, which will be located at different geostationary positions to operate in X, military Ka and UHF bands. The communication payloads of both satellites are provided by Spanish industry, including the integration of the Communications Module in Spain, a major step forward for Spanish industry. Airbus Defence and Space in Spain is responsible for the X-band payload, while Thales Alenia Space in Spain is responsible for the UHF and Ka-band payloads. Other companies from the Spanish space industry are also involved.

The SPAINSAT NG satellites include a fully flexible X-band payload, which employs active antennas with in-orbit reconfiguration capability, an integrated digital processor that will interconnect the X- and Ka-band payloads for cross-banding, and a dedicated high-speed service link that enables rapid reconfiguration. The satellites are based on Airbus’ Eurostar Neo platform, a significant evolution of the successful and highly reliable Eurostar series with a full range of important innovations.

The latest technologies such as Artificial Intelligence, Big Data, Internet of Things, etc. are being applied in the development of new applications and services provided on the new satellites.

The first one of the SPAINSAT NG satellites will be launched i and the second one a year later, guaranteeing the continuity of secure communications services.

The SPAINSAT NG satellites will have an operational lifetime of 15 years, remaining in service until 2039.

Hisdesat was born in 2001 as an operator of government satellite services to act primarily in the areas of defense, security, intelligence and foreign services. Since 2005, the company has provided secure satellite communications services to government agencies in different countries and since September 2018 it has been providing Earth observation services with radar technology through the PAZ satellite, launched successfully on February 22, 2018. It also provides a constellation of maritime traffic information satellites (AIS).  www.hisdesat.es

Airbus pioneers sustainable aerospace for a safe and united world. The Company constantly innovates to provide efficient and technologically-advanced solutions in aerospace, defence, and connected services. In commercial aircraft, Airbus offers modern and fuel-efficient airliners and associated services. Airbus is also a European leader in defence and security and one of the world’s leading space businesses. In helicopters, Airbus provides the most efficient civil and military rotorcraft solutions and services worldwide.

Drawing on over 40 years of experience and a unique combination of skills, expertise and cultures, Thales Alenia Space delivers cost-effective solutions for telecommunications, navigation, Earth observation, environmental management, exploration, science and orbital infrastructures. Governments and private industry alike count on Thales Alenia Space to design satellite-based systems that provide anytime, anywhere connections and positioning, monitor our planet, enhance management of its resources, and explore our Solar System and beyond. Thales Alenia Space sees space as a new horizon, helping to build a better, more sustainable life on Earth. A joint venture between Thales (67%) and Leonardo (33%), Thales Alenia Space also teams up with Telespazio to form the parent companies’ Space Alliance, which offers a complete range of services. Thales Alenia Space posted consolidated revenues of approximately 1.85 billion euros in 2020 and has around 7,700 employees in 10 countries with 17 sites in Europe and a plant in the US. www.thalesaleniaspace.com