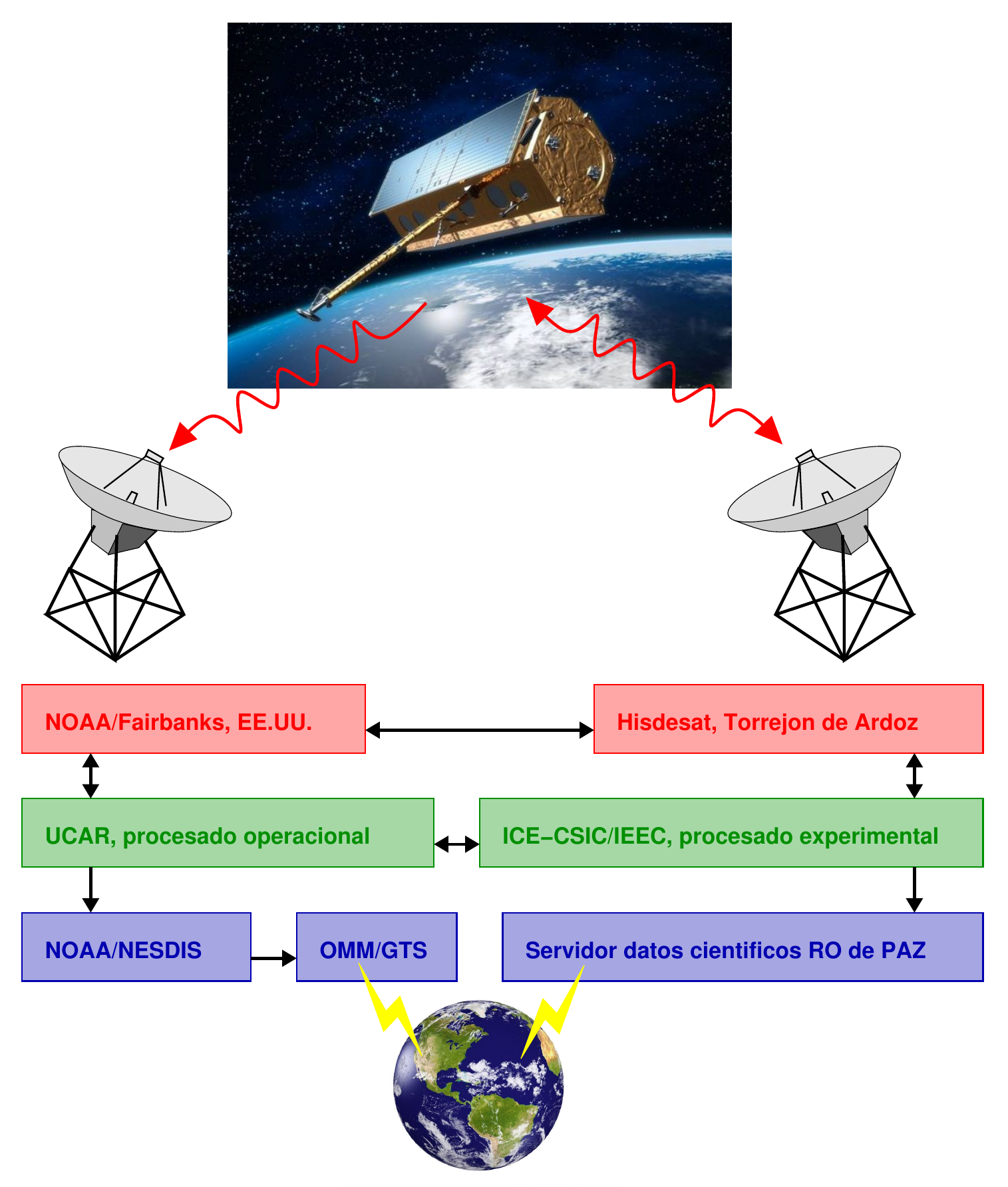 PAZ offers well-distributed information on the vertical structure of the atmosphere
around the world, with information on temperature, pressure and atmospheric
humidity, allowing for more accurate predictions.

● Worldwide distribution is possible thanks to the agreement between NOAA, the
Institute of Space Sciences and the Institute of Space Studies of Catalonia
(ICE-CSIC, IEEC), and Hisdesat.
● This is the first Spanish satellite data to be distributed to meteorological services
around the world continuously and in near real-time.

October 14, 2019.- The atmospheric data obtained by the Spanish PAZ satellite have started to reach all
meteorological services around the world, through the communications system of the World
Meteorological Organisation (WMO), a specialised agency of the United Nations.

This phase, called “operations”, was activated on Friday, 4 October 2019 and represents the
culmination of the data use preparation phase, allowing the continuous and automated data
collection, as well as processing, quality control and distribution to weather forecasting centres
around the world so they can integrate the data into their models.

Weather forecasting requires that measurements of atmospheric parameters arrive with a
maximum delay of three hours from their acquisition by the satellite; this is the so-called “near
real-time”.

The atmospheric measurements obtained by PAZ are derived from observations made with a
GPS receiver on board, using a technique called “radio occultation”. This data is temporarily
stored in the on board computer until the satellite passes near a National Oceanic and
Atmospheric Administration (NOAA) receiving station in Alaska.

From that station, the raw data is sent to the University Corporation for Atmospheric Research
(UCAR), where it is processed, controlled and sent back to NOAA for final transmission to the
global weather services communication system. This entire process takes less than three hours
from its acquisition on orbit.

This milestone has been possible thanks to agreements between NOAA and the CSIC Institute
of Space Sciences and the Institute of Space Studies of Catalonia (ICE-CSIC, IEEC), which are
responsible for the GPS experiment on board PAZ, as well as agreements with Hisdesat, the
company owning, managing and operating the satellite.

“NOAA’s great interest in having the data with minimal delay and Hisdesat’s flexibility to
accommodate the changes necessary for NOAA’s operations have allowed this mission
milestone to be reached,” says Dr. Estel Cardellach, IEEC researcher at ICE-CSIC and
responsible for the experiment. “It is an excellent example of international collaboration, where
NOAA finances the US effort, the Spanish Ministry of Science, Innovation and Universities
finances the cost of the experiment aboard PAZ through its National Space Plan, and thanks to
WMO’s infrastructure, meteorological services from all over the world benefit”, adds Cardellach.

A technique of barely 20 years

The GPS radio occultation technique was developed between the mid-1990s and early 2000s,
and its data has been integrated into weather models since 2006. Last June, NOAA launched
six satellites with this technology, covering the tropics and mid-latitudes (COSMIC-2
constellation); however, initial plans to launch six more satellites to cover the poles and high
latitudes were cancelled. PAZ complements data acquired from other satellites in polar orbits by
densifying these measurements in areas not covered by the COSMIC-2 constellation. This is
why NOAA was interested in participating in the Spanish mission’s radio occultation experiment.
Different studies have determined that this type of data significantly improve weather prediction,
giving them great operational value.

Radio occultation data is one of the observations with the greatest impact on weather prediction,
which means that the prediction is more accurate and, therefore, with fewer errors, when these
data are integrated into the models. This technique makes it possible to obtain information well
distributed throughout the world on the atmosphere’s vertical structure, with information on
temperature, pressure and atmospheric humidity. In addition, it functions as a self-calibrated
thermometer, which helps to correct the biases of other techniques that do require calibration.
UCAR scientists who process the data operationally have evaluated its quality, comparing it to
similar missions. The quality of the PAZ data is equivalent to the missions also operationally
processed, which has led to their worldwide distribution.

During the final preparation phase, data has been preliminarily distributed in the network of
NOAA-related centers. This early access enabled the verification of its operability. As a result,
the U.S. Navy Meteorological Service is already incorporating PAZ data into its weather
forecasts. The U.S. Naval Research Laboratory (NRL) has implemented this process, which has
been operational since 15 August 2019. “The PAZ data are having a positive impact on weather
analysis and prediction, similar to that of other radio occultation satellites,” says the scientist
responsible for this implementation, Dr. Benjamin Ruston (NRL). “This effort is extremely useful
for the community of scientists working with radio occultation data, and an important step toward
incorporating PAZ data into other weather forecasting models,” he adds.

From the Spanish National Meteorological Agency (AEMET), Marcelino Manso, Technical
Advisor for New Observation Developments, recalls that “the radio occultation data taken by the
PAZ satellite are the first Spanish satellite data that are distributed to the world’s meteorological
services continuously and in almost real-time”. Thus, the PAZ satellite reaches one of its
milestones in operational meteorology and service to society, beyond the purely scientific
objectives that originally motivated the radio occultation experiment by ICE-CSIC and IEEC.

Observatories and instruments
The ROHP (Radio-Occultation and Heavy Precipitation) experiment aboard the Spanish
Earth-observation satellite PAZ is designed to test a new technique of surveying the
atmosphere. It will provide coincident thermodynamic and precipitation information with high
vertical resolution within regions with thick clouds. ROHP-PAZ is the work of an IEEC team of
the Institute of Space Sciences (ICE-CSIC) who has created the new measurement concept,
has found international funding and partners, has designed the experiment and will be
responsible for its execution. Experimental precipitation data are not part of the operational
packages distributed by WMO.
Links
– IEEC
– ICE-CSIC
– ROHP-PAZ experiment
– ROHP-PAZ website
– Hisdesat

More information
The Institute of Space Studies of Catalonia (IEEC — Institut d’Estudis Espacials de Catalunya)
promotes and coordinates space research and technology development in Catalonia for the
benefit of society. IEEC fosters collaborations both locally and worldwide and is an efficient
agent of knowledge, innovation and technology transfer. As a result of over 20 years of
high-quality research, done in collaboration with major international organisations, IEEC ranks
among the best international research centers, focusing on areas such as: astrophysics,
cosmology, planetary science, and Earth Observation. IEEC’s engineering division develops
instrumentation for ground- and space-based projects, and has extensive experience in working
with private or public organisations from the aerospace and other innovation sectors.
IEEC is a private non-profit foundation, governed by a Board of Trustees composed of
Generalitat de Catalunya and four other institutions that each have a research unit, which
together constitute the core of IEEC R&D activity: the University of Barcelona (UB) with the
research unit ICCUB — Institute of Cosmos Sciences; the Autonomous University of Barcelona
(UAB) with the research unit CERES — Center of Space Studies and Research; the Polytechnic
University of Catalonia (UPC) with the research unit CTE — Research Group in Space Sciences
and Technologies; the Spanish Research Council (CSIC) with the research unit ICE — Institute
of Space Sciences. IEEC is integrated in the CERCA network (Centres de Recerca de
Catalunya).