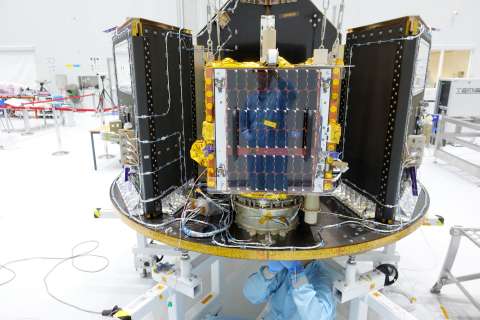 The satellite will undergo commissioning testing over the next few months and then will be brought into service to provide advanced high-performance vessel detection and tracking capability as part of exactEarth’s industry-leading global constellation of more than 70 high performance automatic identification system (AIS) satellites providing real time monitoring of the global shipping fleet.

VV16 is Arianespace’s first Vega Small Spacecraft Mission Service (SSMS) rideshare flight that injected a total of 53 satellites into orbit. At approximately 52 minutes after launch, ESAIL was released into a sun-synchronous orbit with Local Time at Descending Node (LTDN) of 10:30 am at an altitude of 515 km.

ESAIL is a high-performance microsatellite, built by LuxSpace with the support of the Luxembourg Space Agency under an ESA Partnership Project with exactEarth and the support of the Canadian Space Agency. It will track ships worldwide by detecting messages that ships radio-broadcast via AIS. As part of exactEarth’s Satellite-AIS constellation, ESAIL will provide AIS data for the monitoring of maritime traffic on a global basis. It will improve fishery monitoring, fleet management, environmental protection, and security monitoring – making the seas safer.

The first contact with the ESAIL satellite was successfully made by the ESAIL project team within hours after launch. The project team, consisting of team members from exactEarth (mission operator and owner), LuxSpace (prime contractor) and the European Space Agency (project sponsor) have gained control of the satellite, which is in good health. In the coming days and weeks, the satellite will undergo commissioning and in-orbit testing prior to being put into service as part of exactEarth’s Satellite-AIS constellation. The ESAIL satellite is designed for a mission life of approximately four years.

“We are very excited to add this advanced technology satellite to the exactEarth constellation,” said Peter Mabson exactEarth CEO. “ESAIL incorporates advanced antenna and receiver designs which, together with exactEarth’s advanced decollision processing technology is expected to set a new standard for Satellite-AIS vessel detection. I would like to thank ESA, the CSA and the Luxspace-led European satellite manufacturing team for helping to achieve this important milestone. Onwards and upwards!.

About exactEarth Ltd.
exactEarth is a leading provider of global maritime vessel data for ship tracking and maritime situational awareness solutions. Since its formation in 2009, exactEarth has pioneered a powerful new method of maritime surveillance called Satellite AIS and has delivered to its clients a view of maritime behaviours across all regions of the world’s oceans unrestricted by terrestrial limitations. exactEarth’s second-generation constellation, exactViewTM RT, securely relays satellite-detected AIS vessel signals from any location on the earth’s surface to the ground in seconds – thus enabling global real-time vessel tracking. This unique capability consists of 58 advanced satellite payloads designed and built by L3Harris Technologies, Inc. under agreement with exactEarth and that are hosted onboard the Iridium NEXT.

Forward-Looking Statements
This news release contains statements that, to the extent they are not recitations of historical fact, may constitute “forward-looking statements” within the meaning of applicable Canadian securities laws. Forward-looking statements may include financial and other projections, as well as statements regarding exactEarth’s future plans, our ability to continue as a going concern, objectives or economic performance, or the assumptions underlying any of the foregoing, including statements regarding, among other things, expectations of our exactView RT offering relative to competitors, financial impact of the Myriota transaction, expectations of the exactView RT capabilities driving growth, growth opportunities for the Company in the maritime information services market and the cost and revenue share in connection with the L3Harris Agreement. exactEarth uses words such as “may”, “would”, “could”, “will”, “likely”, “expect”, “anticipate”, “believe”, “intend”, “plan”, “forecast”, “project”, “estimate” and similar expressions to identify forward-looking statements. Any such forward-looking statements are based on assumptions and analyses made by exactEarth in light of its experience and its perception of historical trends, current conditions and expected future developments, as well as other factors exactEarth believes are appropriate under the relevant circumstances. However, whether actual results and developments will conform to exactEarth’s expectations and predictions is subject to any number of risks, assumptions and uncertainties. Many factors could cause exactEarth’s actual results, historical financial statements, or future events to differ materially from those expressed or implied by the forward-looking statements contained in this news release. These factors include, without limitation: uncertainty in the global economic environment; fluctuations in currency exchange rates; delays in the purchasing decisions of exactEarth’s customers; the competition exactEarth faces in its industry and/or marketplace; the further delayed launch of satellites, the anticipated benefits of the A&R SABA; the financial impact of the Myriota transaction; the impact of the COVID-19 pandemic on customers and the market generally, the reduced scope of significant existing contracts; and the possibility of technical, logistical or planning issues in connection with the deployment of exactEarth’s products or services.